THE BIG FIVE ANIMALS TO SEE ON SAFARI

Most people who go on a safari want to see the Big 5 – but which animals make up the Big 5?

In times gone by European hunters used to search out the most difficult to hunt animals in Africa which led safari clubs to create a list of five key animals that were a challenge to shoot. These were considered difficult for a number of reasons, including ferocity, visibility and elusiveness.

Nowadays most people simply want to get close enough to the Big 5 to be able to photograph them. Members of the Big 5 are as follows: 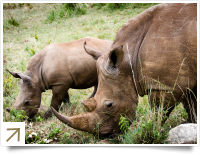 Lion. Lions really are the kings of the savannah and are at the top of the food chain. As such they need no introduction. Lions are widespread throughout southern and eastern Africa and you’ll have a good chance of seeing them in most safari locations.

Black Rhino. Now critically endangered, the black rhino is not actually black, but more off-white. Despite its huge bulk and dangerous reputation, rhinos are herbivores who would much rather graze on some grass than attack a person. There are few rhinos left in the wild due to a large increase in poachers hunting them for their horns.

Cape Buffalo. The African buffalo is a long-horned bovine, widespread throughout safari destinations. Despite being a bovine the buffalo is actually the most dangerous of the Big 5 and will attack anyone who tries to attack it. 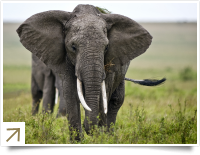 Leopard. These elusive felines are nocturnal and secretive, making them probably the most difficult member of the Big 5 to actually spot. When you do see one, though, chances are it will be lounging in a tree at sunset, having just eaten its dinner.

African Elephant. Elephants, as most people know, are large, thick skinned herbivores with long trunks and tusks. Elephants are numerous in Africa but nevertheless can be hard to spot in some areas due to their ability to hide in bushes and long grass. Despite being widespread, elephants face a growing threat from poachers, who hunt them for their ivory.

Spend 4 relaxing days on Kenya's top beach and 2 days enjoying the animals and stunning setting on a true Kenyan safari. To make the Safari even more special we are including a FREE night game drive.
Diani Beach - Tsavo West

A unique opportunity to see the Great Migration in the Masai Mara this August with space we are HOLDING so therefore can CONFIRM during this peak season in Kenya. Dont miss out!
Masai Mara

Pure luxury is in store for you on this four night flying safari!
Masai Mara National Reserve

Short on cash? Then Camping is the perfect way to witness the Great Migration this July / August for much less than you would pay to stay at a hotel or lodge.
Masai Mara National Reserve

Out of Africa Air Safari

From the soft leather seats of the aircraft you will look out over the vast plains of Africa while the pilot provides commentary on the landmarks and wildlife.
Masai Mara - Amboseli - Tsavo East & West

Wings Over The Rift Valley

Soft leather reclining seats with the ability to move in all directions to ensure a lot of leg space – this allows you to travel in style.
Northern Kenya - Lake Naivasha & Masai Mara

A perfect mini break that won’t ‘break’ the bank. Two of Kenya’s finest destinations. A ‘Great Lake’ and a ‘wildlife marvel’ you couldn’t ask for more on a three night adventure through Kenya.
Lake Naivasha - Masai Mara

Stylish, unique and exclusive. Our Kenya in Style safari is for those that appreciate the finer things in life.
Samburu National Park - Masai Mara

Short, sweet and luxurious this Masai Mara Safari is the perfect addition to a Kenyan beach holiday or a great quick trip to see the wonders of the Masai Mara.
Masai Mara National Reserve

Stunning views of Kilimanjaro, the most famous of the Rift Valley lakes and the jewel in the crown - the majestic Masai Mara. An amazing opportunity to tour Kenya with a group of safari enthusiasts.
Nairobi - Amboseli - Lake Naivasha - Lake Nakuru & Masai Mara

The Best of East Africa

East Africa is known for its bountiful wildlife and breathtaking scenery and you will see the best of it on this spectacular journey through both Kenya and Tanzania.
Amboseli - Ngorongoro - Serengeti & Masai Mara

See two of Kenya’s gems in style and comfort and get a taste for the country's extraordinary beauty - from the flamingo lakes in the Rift Valley to one of Africa’s showpiece parks, the Masai Mara.
Lake Elementaita - Masai Mara

We bring you the perfect camping safari for the adventurous traveller who wants to see what Kenya has to offer without blowing the budget.
Mount Kenya - Samburu National Park & Masai Mara
Go to top