Relax on miles and miles of tropical paradise beaches 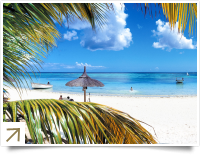 If miles and miles of white sandy beaches, coral reefs, fresh seafood and blue skies is your idea of a perfect holiday destination then you’re in luck when it comes to Kenya. Most beaches along the Kenyan coast are protected by reefs making the sea ideal for swimming and scuba diving in. A visit to the coast of Kenya can be as relaxing or action packed as you wish, with everything from large resorts and water sports to untouched gems reachable only by 4X4 or dhow.

The Indian Ocean laps gently against the coast of Kenya and one of the best places to visit if you’re after a spot of tranquillity is the tropical Manda Island, part of the Lamu Archipelago – an unspoiled tropical paradise - where you can undertake a voyage by dhow and visit the ancient Takwa ruins. And exploring the historic backstreets in the nearby sleepy town of Lamu is a real treat for the traveller who needs to recharge before returning home, perhaps after spending some time on safari.

What’s more, the coast also offers a host of wildlife to observe, from thumbless monkeys and elephant shrews to dolphins and turtles, meaning you’ll never be ‘off safari’ even when relaxing on the beach. 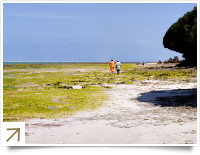 Any visit to the coast will likely include a stopover in the coastal city of Mombassa, which has a long and rich history dating back over 1,500 years when it started as a trading port. The Portuguese explorer, Vasco Da Gama, landed here in 1498 and established a colony. Arabs from Oman later took over the city, leaving their mark on the region and the city is now noted for its Swahili culture - a mixture of Arab and African traditions.

Although Kenya is not best known for its coast and beaches, travellers often come away saying that this was the highlight of their holiday – the icing on the cake when combined with a safari.

Spend 4 relaxing days on Kenya's top beach and 2 days enjoying the animals and stunning setting on a true Kenyan safari. To make the Safari even more special we are including a FREE night game drive.
Diani Beach - Tsavo West

Out of Africa Air Safari

From the soft leather seats of the aircraft you will look out over the vast plains of Africa while the pilot provides commentary on the landmarks and wildlife.
Masai Mara - Amboseli - Tsavo East & West

Set on the white sandy beaches of Diani, Swahili Beach is the latest contender when it comes to stylish indulgence on the Kenyan coast.
Diani Beach

From the moment you arrive at the Waterlovers resort in Diani on Kenya’s south coast you will realise that you have found your own little slice of heaven.
Diani Beach

A perfect mini break that won’t ‘break’ the bank. Two of Kenya’s finest destinations. A ‘Great Lake’ and a ‘wildlife marvel’ you couldn’t ask for more on a three night adventure through Kenya.
Lake Naivasha - Masai Mara

The Best of East Africa

East Africa is known for its bountiful wildlife and breathtaking scenery and you will see the best of it on this spectacular journey through both Kenya and Tanzania.
Amboseli - Ngorongoro - Serengeti & Masai Mara

See two of Kenya’s gems in style and comfort and get a taste for the country's extraordinary beauty - from the flamingo lakes in the Rift Valley to one of Africa’s showpiece parks, the Masai Mara.
Lake Elementaita - Masai Mara
Go to top